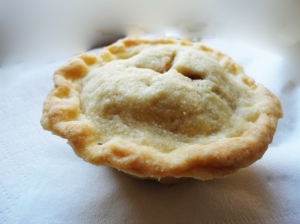 When I saw them on this website, I knew I will prepare them as soon as possible. And so I did. They are really tasty though preparation is time-consuming. All in all it was worth all the effort because they are delightful. Enjoy!

Place the flour, sugar (2 tablespoons/30 grams) and salt in the bowl of your electric mixer. Add the butter (225g) and mix until the mixture resembles coarse meal.

Pour 1/4 cup (60 ml) water in a slow, steady stream until the dough holds together when pinched. If necessary, pour more water. Mix for only about 30 seconds.

Remove the dough from the mixer bowl, cover with plastic wrap and refrigerate for about one hour before using.

Peel the apples, core them and cut them into teeny tiny dices. Place the dices into a bowl. Add the sugar (100 g), lemon juice, salt, cornstarch and the cinnamon.

Melt the butter (30 g) in your microwave and add to the mixture. Mix.

Remove the dough from the fridge and place it on a lightly floured surface.

Using a rolling pin, roll it out to about 0.1-inch (3 mm) thickness. Then cut out circles from the dough (bigger for the bottoms and smaller for the lids). Gently press the bigger circles into muffin forms. Fill the dough with the apple mixture so that it comes over the top of the pan. Put the smaller circles on top of your apple pies. Press the edges down softly. Use fork to create ornaments.  See pics below. 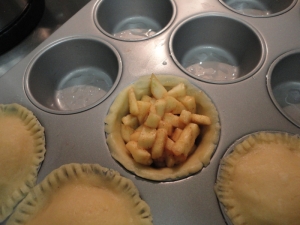 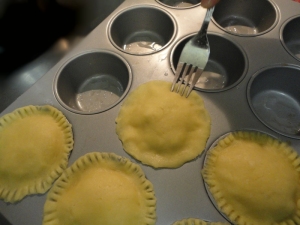 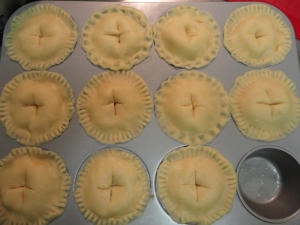 Using a sharp knife make two slits in the centers of pies to allow the steam to escape.

Place in the oven and bake for about 25-30 minutes or until golden brown.